I’ve been running a Windows Home Server for about 2 years now using a low cost VIA based home built system, and I’m very happy with it. Just a few examples of how useful it’s been:

Though the backup capability is nice (I have a lot active PCs in my house), the real value of WHS came home to me when I needed to find some old emails from 9 months back that I thought I’d kept when upgrading my laptop from Windows XP to Vista. My home server had been configured to keep both the old XP backups I’d been making regularily up until Nov 2009, then it was keeping  a new set (under the same PC name) for the newer Vista Operating system I’d installed.

Here’s the steps I went through to get my now Windows Vista laptop temporaily reverted back to it’s Nov 2009 Windows XP state:

A long winded process that took several hours (actually left some of it running over night on the last restore step), but it did the trick and worked pretty nicely. Of course, not as nice and instant as the Apple Time Machine (which wouldn’t have been able to go back to a prior OS install), but achieved the same functionality.

I have a Supermicro based motherboard which I installed several months ago in a test server and was delighted with the built base management which allowed me to do 100% of the pre-boot, OS install and applications installs remotely from my laptop over my LAN. Firing up via the dedicated Ethernet management port and a standard web browser couldn’t have been easier (once I’d figured out the default user and password). 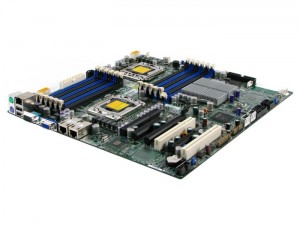 Then I fired up the new Dell T110 server a few weeks later with the similar sounding iDRAC.  I have to confess up front here that I’m not a Dell OpenManage guru, but I’ve come to personally expect a certain amount of simplicity with any type of management interface and given the amount of initial installation, downloading and reading through web sites and manuals, my initial reaction is that iDRAC is not yet ready for the lowly end user/SMB class of user. I basically went from a really simple to use interface on the SuperMicro that was pretty much self explanatory, to several hours of learning of which software to download for my Dell (I purchased without an OS so was provided no driver CD when it arrived). Once I identified what I thought was the right software, I’m still working on it. Hopefully I’ll get it going soon when I have a few spare hours and can report better results, but for now, the SuperMicro approach seems to be working much better for me.

I think keep-it-simple for us “stupid” users (KISS) is the operative word here and may have been lost somewhere in the OEM community …. Hopefully they can take a lesson from the simpler approach adopted by the SuperMicro (and other similar approaches using the same technology).

Check out the Server Pages for more information on my experiences with the Supermicro remote server management approach here.

I have to confess that in true tekinerd style, I actually have an SBB storage chassis in my garage; hence the reason I’m writing about it I guess. Thanks to my good friends at AIC, I’ve actually had one of their first prototype SBB chassis for nearly 2 years now (still here if you need it back guys). Why? We actually built and demo’d a 4G and 8G Fibre Channel SBB based storage solution based on an AMD Opteron running Linux with a RAIDcore host based RAID stack back in 2007-2008 timeframe working with some very talented engineers in Minneapolis.

I knew I liked SBB when our first proto fired up and we were able to demonstrate pretty quickly without building a chassis that our controllers worked. We had infact designed a specialty enclosure for a military application, but the chassis that AIC provided us at the time was not only ideal as a bring up chassis, but also as a demonstration to ourselves that we could also offer a commercial version of the product using an off the shelf chassis. That was the cool part. Develop for one chassis, and bring up in another commercially available chassis. Even cooler however was that this was a full Linux server as well. We could turn different host interfaces and switch between basic SAN and NAS (or both) functionality pretty easily.

Storage bridge bay, or SBB, is now at revision 2.0. It all started in 2006 when Dell, EMC, LSI and Intel banded together to create the SBB Working Group. Many other vendors have since joined in. To date however, only a handful of vendors have adopted with the orginal intent in mind of an open platform, with the majority of the market staying on the disk array side with proprietary or what I’d call non-open SBB solutions. Examples of proprietary solutions are HP MSA and EVA, EMC, NetApp and so on with only Dell, Xyratex, Xiotech and a few whitebox manufacturers such as AIC and SuperMicro adopting SBB and in most cases, as one more line item they offer versus whole hearted adoption.

So if it’s so cool, why hasn’t it proliferated?

The answer lies in the motives behind SBB and the end user value equation. As far as motives are concerned, several large OEMs like SBB as they can drive increased competition amongst the storage array vendor community. On the end user side, SBB has demonstrated no real benefits with the versions of products that are available beyond what you can get today with the proprietary versions. Let’s face it, SBB to an end user, there is no benefit in an SBB approach if there are no well developed open market controllers to plug, play and match with.

Several other factors to consider:

What does this mean for SBB?

The strength of SBB is not in its ability to replace existing entry level or mid-range disk arrays. As it is an open standard, it fosters more innovation by allowing many more smaller volume vendors and developers to create a value add controller without having to go through the rigmarole of developing a whole chassis solution. Further, the fact that both Intel and AMD provide development kits to select partners to be able to put a whole PC or server architecture on an SBB blade allows a whole lot more than just plain RAID level storage functions.

This is where the “storage” in SBB becomes a little cloudier as there is no reason why an SBB controller blade could in fact be a complete NAS or a virtual server head running several end user processes as well. It could also be a virtualized storage controller with complete cluster capabilities using off the shelf operating systems versus the closed software of today’s SBB controllers using the same identical hardware and just a software change.

The industry needs to wake up to the possibilities of SBB not as a replacement for what they have but as a platform for the next evolution of intelligent storage devices.

A few suggestions to the SBB community from someone who’s tried to make it fly:

Overall, SBB is a great start to break the proprietary stranglehold of the traditional storage vendors and drive storage to the next level, but it takes more than just a hardware standard to do it… it requires an eco-system of next generation thinkers.

I’m reminded yet again as I read the morning news of the volatile times we live in. Job losses (or small gains more lately thankfully) especially in technology and engineering all seem familiar and normal nowadays. Those of you recall the high tech crash of 2002/2003 may remember a book called “Who Moved My Cheese“, an excellent and short story about groups of mice faced with the same challenges, but dealing with them in a different way. BTW, this is a must read for anyone who has either gone through or is facing a new set of challenges either in your personal or business lives, specifically a job loss, company shutdown, products losing steam and so on.

Having been through this many times now in both product and personal development situations, this old wisdom is definately on the money and best of all, simple enough even for us tekinerds to understand and relate to. This up and down economy is a norm we all have to get used to and more importantly adapt to. We all have to (continue to) educate ourselves as to what end users or technology really need versus what we can build, and focus on addressing real problems that exist and can be solved. This way, we’ve increased the chances that what we’re working on is relevant and needed.

Whatever your situation, happy adapting… again.

SBB, or storage bridge bay (see link on the right), was originally intended as a standard and open disk array platform that allowed different controller and chassis vendors to plug and play.

Then a few years ago, Intel and AMD started providing reference designs to several OEMs that provided their almost latest and greatest CPU and core logic chipset technology used in regular server environments in the SBB form factor. Not as powerful in terms of raw CPU power you find in typical servers, but still a viable x86 server (two in fact – one per SBB slot) that can run Linux, NAS, SAN target software, tiered storage maybe, thin provisioning, host failover in a single box, etc, etc, etc.

So why hasn’t it caught on? CPU too under powered? OEMs not getting behind it?

All good questions. The opinion here is that there is great potential in the SBB platform, but not for the original design goals stated. For one, the name – SBB = storage bridge bay – implies this platform can only do storage. Secondly, the focus has been on replacing low cost disk array controller technology with a more expensive CPU + software based technology for RAID and other storage functions, instead of focusing on the far greater potential of what else you can use that CPU for given a far more open software environment.

Bottom line, a few suggestions for the powers to be working on SBB: